Book Review: The Power of ‘The Psychology of Money’ for Me and My Clients

Ever since I started my boutique wealth practice, Prioritas Financial Advisors, I’ve wanted to connect with great people to discuss big ideas. Most of my clients are high achieving women and couples who’ve had tremendous life experience. 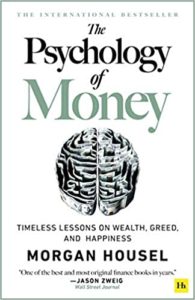 Through my monthly Prioritas Book Club, I’ve discovered a wealth of client stories waiting to be shared. I choose the books ahead of time and divide the reading into smaller, more manageable chunks replete with questions for discussion.

While the books we’ve explored to date have all been fantastic, “The Psychology of Money: Timeless Lessons on Wealth, Greed, and Happiness” by Morgan Housel has resonated tremendously with me and my clients.

While money is typically taught as a math-based field, in the real world, people’s financial decisions are made through a combination of our personal history, unique worldview, ego, pride and all sorts of odd incentives.

Here are just a few reasons why the book has hit home for my clients (and myself):

Housel says that few topics offer a more powerful magnifying glass that helps explain why people behave the way they do than money, and it’s the greatest show on Earth.

Because of what I’ve experienced, it’s transformed my understanding of true wealth…but most people don’t ever get to know what’s going on under the hood.

“The Psychology of Money” makes an important distinction between being wealthy and being rich. “Wealth” is what you don’t see, the hidden income that isn’t spent but provides value in the future opportunities it affords. “Rich” is current income and much easier to spot as people often go out of their way to flaunt it.

My clients appreciated the stories in the book that contrast janitor and philanthropist Ronald Read with the Harvard-educated Merrill Lynch executive Richard Fuscane. Read lived modestly, but then bequeathed his $8 million fortune (that came from patiently investing over time) to charities when he died. Fuscane lived the high life and went bankrupt when the 2008 financial crisis hit.

We had a lively discussion about how only in finance can you find such massive outperformance by someone with no training or background compared to the best education and connections. In personal finance, behavior tends to trump knowledge, and the single biggest predictor of success is knowing…

2) When Enough is Enough

There are real dangers to feeling like one doesn’t have enough. Housel uses the analogy of food. Few people try to find out how much food they can possibly eat because vomiting hurts…but the same logic doesn’t translate to investing, and the results can be worse.

I had a friend who used to work for Bernie Madoff; she is always quick to point out that she worked for the legitimate market-making side of the business, not the Ponzi scheme.

What’s overlooked is that before his Ponzi scheme made him infamous, Madoff was an incredibly successful businessman with the legitimate arm of the business making between $25 to $50 million annually.

One client told a story of how having enough was impressed on her by her father at a young age. Their neighbor decided to invest with his son in land near the airport in the early 1970s, with the ultimate intention to build a hotel.

At an early stage, the neighbor asked my client’s father’s advice as he could make $1 million profit quickly just by selling the land, and her dad urged him to do so. However, the neighbor decided to keep the land with the hope of making millions once a hotel was built.

Shortly after in 1973, the Middle East oil crisis hit and his land became worthless. Not only did her neighbor lose a lot of money, but he was forced to remortgage his house that had been fully paid. When he simply tried to make as much as possible rather than what would be enough to live comfortably for the remainder of his life, her neighbor didn’t understand the most important benefit of money…

Housel explains that money’s greatest intrinsic value is its ability to give you control over your time, and the highest form of wealth is the ability to wake up every morning and say, “I can do whatever I want today.”

I’d been working with a wonderful client for a few years who was burning out at work. She and her husband had saved well over decades, and he was already semi-retired. He’d been trying to convince her to quit as her job was affecting her health and their relationship since she was working all hours of the night and many weekends.

I had gone through financial projections with them, showing how their savings would last them without income; I had done a few career coaching sessions with her to help to establish better boundaries at work, and to start considering winding down.

Nothing either of us said moved the needle for her, but when our book club met, she told everyone, “I gave notice to my job and will be done by the end of the month. I have the chapter Freedom to thank!”

The Prioritas Client Book Club has been a source of inspiration for my clients as well as for me. I hope the idea catches on and more great conversations arise from wonderful books like “The Psychology of Money.” We are all looking forward to our next read!